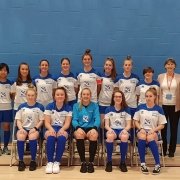 We are delighted to announce that we are sponsoring Chichester College Women’s Football team. The partnership will start with immediate effect and will involve front of shirt sponsorship for all strips for three seasons.
Emma Alexandre, who coaches the team, approached the company during the summer after a very successful season which culminated in the team winning the AoC Sport National Championships in April 2018. The team were crowned National Champions after beating competition from eight other college sides (including elite category sides linked to the FA’s Women’s Super League) to claim victory. This was a great achievement for the college’s Female Football Academy, which is only in its second year.
The strip was unveiled earlier this week, and it has been warmly received by the team.
Captain Amber Howden, who is studying sport and exercise science, said: “We love the new kit and we are really grateful to D W Plastics for their support.”
“The kit is really fresh, it’s a new look for us and it makes us feel more professional. It brings us all together under the college colours.”
Matt Wright, Deputy Head of Learning for Sport at Chichester College, said: “The support from D W Plastics means a lot to the team and it is thanks to the hard work of Emma and Sue that this fantastic opportunity has come about.”
“It is great to work with local companies and for them to see value in our sports teams. Being able to buy new kit, in the college colours, is brilliant and it gives the team something to take pride in. We had a fantastic season last year, and hopefully, we’ll be able to celebrate more successes this season.”
Sue Burley, Managing Director said; “We are excited to be supporting the team and are looking forward to following their progress during the season. We hope that they can replicate their success of last season, but most of all that they enjoy themselves. I applaud the Academy’s commitment to promoting the sport to local youngsters to try to inspire them to engage in sport whether football or any other type of sport.”